October 2020 was a month of excitement for the Predator Free Rakiura project! 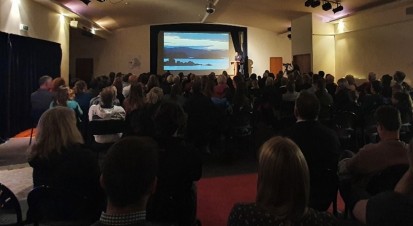 On Tuesday 13 October, the Halfmoon Bay School and the Predator Free Rakiura (PFR) group co-hosted an evening with the community. The event was to present the world premiere of Tiakina Te Wharawhara, a film made by the school about how to protect Ulva Island, and to share an exciting announcement about the PFR project. With over 150 people in attendance, the community centre was abuzz!

The PFR group wanted to share their announcement with the community first at this special community evening. The news was a million-dollar funding boost over 12 months, with up to $5 million on the table over the next 5 years! This funding is a significant milestone for the project that will enable it to move to the next phase – planning and design. This years’ funding will be used to establish a strong governance structure, kick-start project design, establish a project team and develop a project plan. Predator Free Rakiura is an aspirational project with a logo that reminds us of one of the ambitions of the project – to bring home the kākāpō. The kākāpō have had a couple of very successful breeding seasons in 2016 and 2019 and the result is their current main breeding sites of Whenua Hou and Anchor Island are running out of room. Kākāpō need large, predator-free sites with dense rimu forest to trigger breeding and sadly there aren’t many of these spaces left. However, returning kākāpō to a Rakiura free of predators will be an ideal solution.

Stewart Islanders Summer Thompson and Lania Davis joined the Department of Conservation and Ngāi Tahu for the release of four male kākāpō on Pearl Island. Although the site isn’t ideal for breeding due to the presence of rats and weka, it is able to house adult males not currently needed as part of the breeding population.  This will free up habitat for pairs keen to breed at breeding sites.

Summer Thompson shared some of her insights from the trip:

Why did you head out to Pearl Island?

To transfer some kākāpō from Whenua Hou to Pearl Island. There are too many birds on Whenua Hou so they needed to find a new home.

What did you learn?

Why is a predator free Rakiura of importance to the kākāpō recovery programme?

If Rakiura/Stewart Island goes predator free then kākāpō will be able to return without the fear of being killed or going extinct.

Why are you excited about a Predator Free Rakiura?

It will be a very big job but not having predators will be a great benefit to the island.

What was the highlight for you?

When Manawanui (a kākāpō) ran right past my feet when he was released. It was also my first time in a helicopter. The whole experience was all around amazing and I feel very lucky and privileged to have gone.

During October a team of Takahē specialists visited Rakirua to carry out a habitat assessment for this critically endangered, flightless bird.
Over the last few years the Takahē population has grown substantially and now stands over 400 individuals thanks to advancements in the breeding programme.

The main challenge facing the Takahē is the availability of suitable, predator free wild sites. DOC Takahē Ranger Jason says, “The habitat assessment was only made possible by the great progress the PFR Leadership Group had made towards making the island Predator Free”.

While Rakiura wouldn’t address all the issues faced by the birds, the Mason’s Bay area may be a suitable habitat for a number of pairs. This is yet another example of how removing predators from Rakiura has the potential to make a real difference for at-risk species.