Ray’s decades of dedication towards predator control on Rakiura

Predator Free Rakiura project member Ray Phillips has dedicated more than 30 years hunting, trapping predators, and maintaining hunting huts in the some of the most remote forests of Rakiura/Stewart Island. 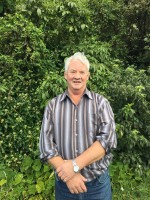 The former president and current life member of the Southland Branch of the New Zealand Deerstalkers Association was introduced to the island through hunting in 1988.

“One of the things that came out of my first visit to the island in 1988 was my branch adopting two huts on Mason Bay, because a huge number of hunters arrive on Rakiura each year which puts a lot of pressure on campsites. Then, in September 1999, all interested parties met and decided that a permanent hunting hut would go a long way toward resolving most of the problems this pressure caused.”

This meeting led to the formation of the Rakiura Hunter Camps Charitable Trust to manage the building and maintenance, and Ray has been a trustee since its inception. Today, the trust owns and maintains 18 huts on the island. “The last hut was built at Little Hellfire Bay over five days in November 2018. It cost almost $40,000 to build, with all the labour input being voluntary. Apart from small grants from the Department of Conservation, Lotteries Commission, and the Community Trust of Southland when the project started in 1999, all the funding for these huts has come from hunters.”

In addition to this, Ray says the trust spends over $1000 annually on rat poison and cat/possum traps placed around each hut, with a further 18 KA2 Kats Traps to be placed by each hut later this year. “Hunting may have brought me to the island, but I believe we must also care for the environment we spend a lot of our recreational time in. I haven’t met a hunter that doesn’t want to get rid of the feral cats and rats.”

Ray’s passion for conserving Rakiura’s environment has also seen him volunteering on behalf of the Southland Deerstalkers’ club to help remove gorse at Mason Bay. A firm believer in the value of volunteers, Ray played a major part in keeping the Southland Field Radio service going for more than more than 20 years until it ceased in 2009.

“I joined in 1984 and took over the position of Coordinator in 1987, managing the bookings and maintenance of the radios. The service covered all of Fiordland and Rakiura, and by the time the service stopped, we had 74 sets which were all out in the field during the busy periods.

"These were used by hunters, trampers, kayakers, school groups, or anyone else needing radio service while out in the back country. This work gave me a huge insight into the people using our back country, which has in turn been tremendously useful for all my work on Rakiura.”